On November 26, 2019, the plenary meeting of the Düsseldorf IHK (Chamber of Commerce) honored local entrepreneur, Gerhard Wilhelm Kichniawy with the Silver Badge of Honor. Kichniawy received the high accolade for his reliable, constructive and professional voluntary work for the regional economy. 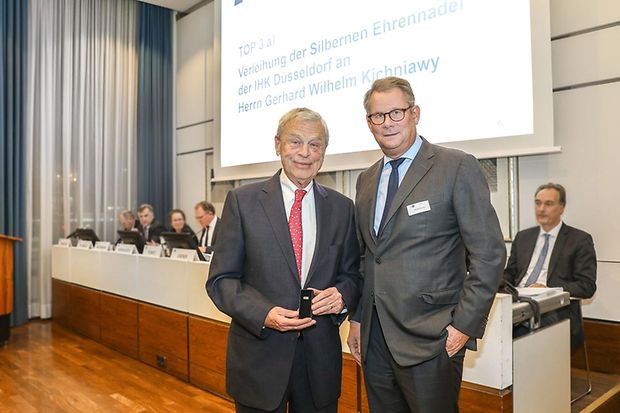 Silver badge of honor for Gerhard Wilhelm Kichniawy (on the left) with IHK President Andreas Schmitz.

IHK President Andreas Schmitz handed him the award with the words:

"The Silver Badge of Honor is intended to express our appreciation for you personally and for your achievement. At the same time, it is a sign of our gratitude for your support of the region's economy and the IHK organization. Dear Mr. Kichniawy, as a sign of our gratitude and respect for your great commitment, I am awarding you the Silver Badge of Honor of the IHK Düsseldorf. Congratulations!"

Gerhard Wilhelm Kichniawy has been a member of the IHK Düsseldorf and the Wirtschaftsjunioren Düsseldorf since 1978. In the latter role, he was co-founder of the Dusseldorf sponsorship model, through which each and every new company founder was provided with a mentor for four to six months, who assisted him / her during the first steps towards self-employment. This model was one of its kind at the time and was awarded with national and federal prizes.

Kichniawy’s special attention, however, was the promotion of German-American trade relations: Since 1983, over more than three decades, Mr. Kichniawy served on the Chamber of Commerce Committee and at times also on the Foreign Trade Committee of the German Industry and Commerce Day (DIHT), today DIHK. Kichniawy was also involved in the Boards of Foreign Trade Chambers (AHK) New York and Atlanta through Gatc LP, founded in 1983 in Atlanta, USA. In 2009 he was awarded the Federal Cross of Merit for his transatlantic engagement.

He also promoted vocational training, for example, as an examiner in the Chamber of Commerce Examination Board "office clerks". Furthermore, Gerhard Wilhelm Kichniawy was a commercial judge at the 8th Chamber of Competition Law at the Düsseldorf Regional Court from 1993 to 2018.